A Common Question about Our Solar Lamps: What's with the Cone? 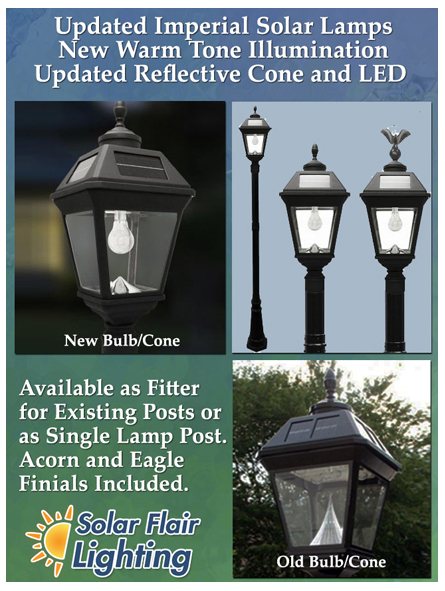 The cone works to effectively intensify and cast the straight, laser like beams of many LEDs.

Solar lighting technology moves rapidly, and in recent years LEDs continually improve so that they cast like more like other types of bulbs.

(Many solar lights that don't use some thing to reflect and/or refract the LED's beam tend to have illumination that "hangs" around the fixture rather where it's needed. Find out more about this with our YouTube Video "Super Bright LEDs Need Help for Super Bright Solar Lighting.)

With improved LEDs, two of our solar lamp lines now use much smaller reflective cones and special LED, and cast warm-white rather than bright white illumination.

What's New and What's the Same

The new Imperials (not to be confused with the Imperial II lamps) have the same design and still come with both the Acorn and Eagle finials. 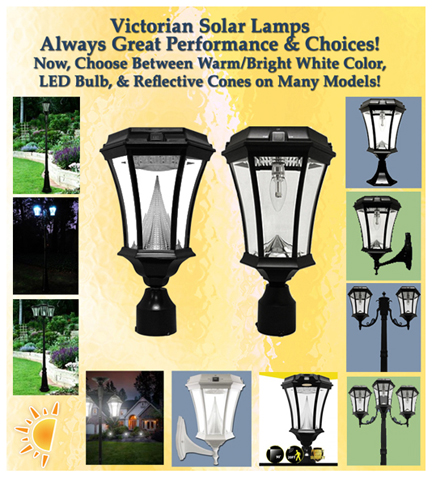 This means you can get the Victorian Solar Lamp with 3 mounting options, as well as the Victorian Single, Double and Triple Head Lamp Posts in your choice of the old or the new cone/LED set-up.

One reason for this is that the Victorian Series is one of the most popular lines due to its classic design and economic price.

What's Coming Down the Road?

While we don't know what lights or when, it's likely that over the next year that other models of our solar lamps will be supplemented with, or replaced by, models using the new reflective cone/LED bulb.

It's important to remember that all of our lamps LEDs continually improve, as do the batteries and components. Any given model produce in 2016 is likely to be brighter than the same model made in say 2012.

How quickly changes and new models will come will largely depend on how popular the new LED/Bulb lamps are and how well they sell compared with the older models.

We also expect new solar lamp series/models will be released using the new LED/cone configuration. We do know that one line not scheduled for changes any time soon is the Baytown Solar Lamp series, another extremely popular line.

As we find out more, we'll let you know, since almost 30 percent of our business is from returning customers.