Pope Francis' Letter: On Care for Our Common Home

Pope Francis' Letter: On Care for Our Common Home
SolarFlairLighting.com

First, we want to make it clear that this post is not about religion, it's about a very important paper written by a religious man who has a worldwide stage to say what he thinks. And Pope Francis is saying climate change is real, in no small part due to people's improper care of the Earth, and it's high time to face the facts. 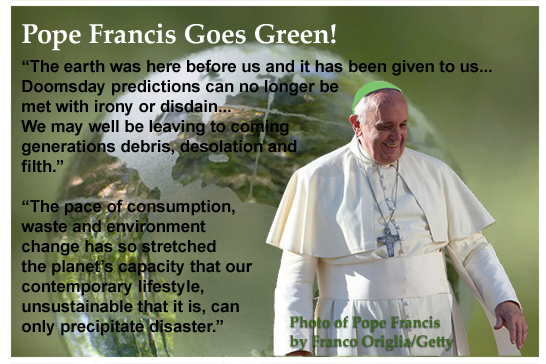 It is a call for nations and individuals to wake up and smell the pollution, floods, droughts, etc. with an outline of suggested actions to try and turn things around before it's too late.

When reading the Encyclical Letter, Laudato Si' Of The Holy Father Francis on On Care for Our Common Home, June 18, 2015 we agree with many things he said and tried to take religion out of the equation.

Why write it? As noted, the Pope has a big audience; "On Care for Our Common Home" will be discussed for a long time, and certainly well into the next US election cycle.

We are a company that focuses on environmentally friendly products, almost all of which use renewable energy. This document has the potential to impact funding for renewable energies. This includes incentives and funding programs for solar lights that many of our customers have used and we hope can use more in the future. 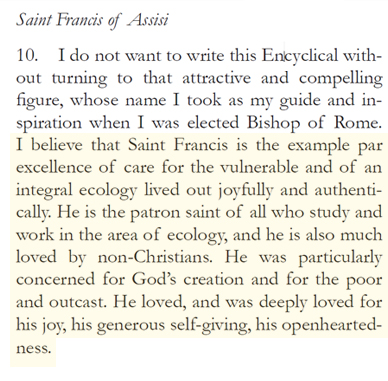 The fact that Pope Francis is a Jesuit and that he chose his name after St. Francis of Assisi, Patron Saint of Animals and Ecology is probably not known by many non-Catholics.

However, this should be basic background for any reporter or pundit commenting on this in the news: none of them should be surprised by it.

Dialogue is Good, Action is Better

We do believe this will get a lot of different types of people talking about the issues, and dialogue should be a good thing.

Consensus and action is better, so let's hope it helps things to move in the right direction.

Ignoring almost all religous and most geopolitical issues, here's what we think are the main points of the letter. We encourage you to read it yourself.

You don't have to buy into everything, and skip over the religion if you like. But you should be aware of what's in it because it's going to be a topic, being released just as the US election season starts to pick up steam. Many would like to dismiss this letter, but it has the potential to play a significant role in 2016 elections.

While religion is of course involved in a letter written by any Pope, he really wanted to draw attention to pragmatic matters and Francis has the perfect platform from which to do so.

"The Climate is a Common Good, Belonging to All and Meant for All".

He writes "At the global level, it is a complex system linked to many of the essential conditions for human life."

He denies that the Earth belongs to Man and that Man is entitled to do whatever he wants with the Earth. Now this certainly will rattle some religious and political cages. "When nature is viewed solely as a source of profit and gain, this has serious consequences for society."

He says that while Man is "endowed with intelligence, [Man] must respect the laws of nature and the delicate equilibria existing between the creatures of this world."

Francis says that we humans have been lousy custodians of the Earth. I don't think how certain people can deny this with a straight face.

The letter states that there there is indeed climate change, backed up by scientific evidence and Francis says people can't deny it and writes "we can no longer sweep under the carpet." He also states: "A very solid scientific consensus indicates that we are presently witnessing a disturbing warming of the climatic system."

He acknowledges that many things cause climate change including volcanoes, natural cycles of the earth and other natural events. However, Francis says that industrialization, carelessness, waste, "throw-away societies" are the primary cause of pollution and climate change, and calls for the world to literally and figuratively clean up our act. He writes:

"Such effects will continue to worsen if we continue with current models of production and consumption. There is an urgent need to develop policies so that, in the next few years, the emission of carbon dioxide and other highly polluting gases can be drastically reduced, for example, substituting for fossil fuels and developing sources of renewable energy."

Francis also blames over-industrialization, especially in certain areas of the world as well as deforestation, uncontrolled fishing, and plenty of things other than the carbon fuels. Sure, nature plays a role, but let's not pretend humans have not made some whopping mistakes.

He acknowledges that many things have factored into climate change. He also says human behavior and technology are the biggest and the only controllable cause and that "we need to reflect on our accountability before those who will have to endure the dire consequences."

The paper is long and so's the list of things negatively impacted. Among them:

"Technology is Not the Answer"

It is not the END-ALL answer, but certainly technology is key, because the Pope (and many others of all political and religious persuasions) do indeed call for more renewable energy. Technology often is a double-edged sword, so he urges nations to enter into agreements for “one world with a common plan.”

Now some will see this as part of the nefarious New World Order, but I don't. We all live on the Earth and as such we must recognize that all people and nations have both a vested interest and a responsibility to change things and to do so quickly.

It's nothing new and it involves things that aren't always popular or easy, including:

He also discusses the need for things that can't possibly be unpopular to rational people: 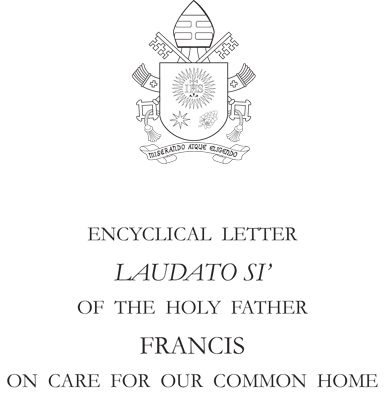 Is this a skimmed over summary, yes. We really want to just get people interested in reading the letter themselves. Don't rely on the talking heads to tell you what it says.

As far as politician's opinions: how many honestly could read the 182 page document and intelligently discuss it in one news cycle. But: the spin masters, pro and con, have been on the news all day.

Online or newspaper summaries are fine reading guides to help get through the long document, which at times can be a tough read. But not impossible.

Just please try to read it for yourself. Few who read it completely will agree with everything written.

And if someone reads it thoroughly and disagrees with everything? Well...that's malarkey.