Veteran's Day Is More Than a Day for Sales

For many retailers, Veterans Day is little more than a way to kick-start early holiday sales. While we welcome purchases any day of the year, we do not hold sales on Veterans Day. Instead, SolarFlairLighting.com asks that you take the time to remember and thank and honor all US Veterans this Wednesday, November 11, 2015. 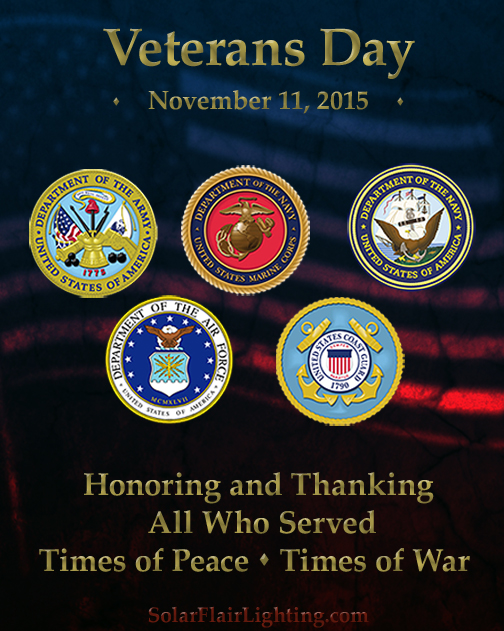 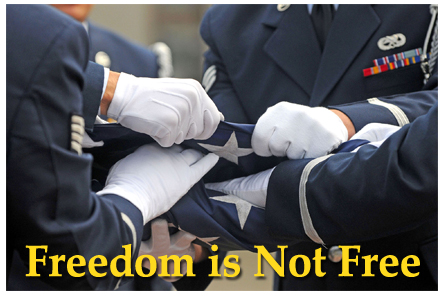 One great way to show you care is with a donation of time or money to a great organization that helps Veterans as well as active service men, women and their families.

The organizations we choose serve a wide range of Vets, active service men and women, and their familes.

Every Veteran's Day, we update our list of highly reputable charities -- all of which get an “A” rating or better from the American Institute of Philanthropy.

The organizations provide a wide range of services from making military family life easier to support after major injuries and death. The list focuses on Veterans of all ages: from WWII through ongoing conflicts.

The goals of many change from time to time: reflecting the needs of the people these agencies serve. The sites are listed in no particular order. Please take a few minutes to visit the websites to see what each organization does. If you can, please make a donation of time or money to one of them.

With an A+ rating, Army Emergency Relief (AER) is the Army’s own emergency financial assistance organization and is dedicated to “Helping the Army Take Care of Its Own.” And that means a lot of things: many different today than 25 or 50 years ago.

AER funds are made available to commanders having AER Sections to provide emergency financial assistance to soldiers,- active & retired, and their dependents when there is a valid need.

Money is not always the best way to help Veterans. According to the VA's official volunteer page, in the past year "over 140,000 volunteers gave more than 11 million hours in service to America's Veterans. It is impossible to calculate the amount of caring and sharing that these VAVS volunteers provide to Veteran patients. VAVS volunteers are a priceless asset to the Nation's Veterans and to the Department of Veterans Affairs."

The VA serves ALL veterans and the needs today often outstrip resources: volunteering is critical. The things you can do range from driving Vets to doctors appointments, assisting in special programs that are cropping up all over the country for Vets, visiting those in VA hospitals, and more. If you have the time but not the money, the best place to start is http://www.volunteer.va.gov/.

"Everyone can do something to show Veterans know how much we appreciate their service. What will you do?"

The Fisher House Foundation also has an A-plus record, meaning that the services are valid, the charity is legitimate and an extremely high percentage of donations go directly to the purpose rather than administrative costs.

According to their own website "Fisher House Foundation is best known for a network of comfort homes where military and veterans’ families can stay at no cost while a loved one is receiving treatment.

These homes are located at major military and VA medical centers nationwide, close to the medical center or hospital they serve. Fisher Houses have up to 21 suites, with private bedrooms and baths. Families share a common kitchen, laundry facilities, a warm dining room and an inviting living room. Fisher House Foundation ensures that there is never a lodging fee. Since inception, the program has saved military and veterans’ families an estimated $282 million in out of pocket costs for lodging and transportation.

Here's a sample of the scope of the Fisher House Foundation's work:

With an A+ rating, the Intrepid Fallen Heroes Fund is a leader in supporting the men and women of the Armed Forces and their families.

According to their website, the The Intrepid Fallen Heroes Fund supports "the men and women of the Armed Forces and their families.

Begun in 2000 and established as an independent not-for-profit organization in 2003, the Fund has provided close to $150 million in support for the families of military personnel lost in service to our nation, and for severely wounded military personnel and veterans.

These efforts are funded entirely with donations from the public, and hundreds of thousands of individuals have contributed to the Fund."

Many of its recent activities have focussed on the "hidden wounds of war," particularly Traumatic Brain Injury (TBI) and Post Traumatic Stress Disorder (PTSD).

The "design and mission of the Intrepid Spirit Centers are based on the original National Intrepid Center of Excellence (NICoE) which opened in 2010 at the Walter Reed National Military Medical Center in Bethesda, MD.  Operated by the Department of Defense, NICoE is the most advanced facility of its kind in the country, and is the center of the Armed Forces’ efforts in researching, diagnosing and treating Traumatic Brain Injury (TBI), psychological health conditions and related injuries sustained by military personnel."

Here's one of their recent videos about these types of injuries, which are not only recognized more than in the past, but much more common in the past as in past wars, many people did not survive the original injuries.

Its mission is to provide, in partnership with the Navy and Marine Corps, financial, educational, and other assistance to members of the Naval Services of the United States, eligible family members, and survivors when in need.

Their website notes that "For more than a century, the Society has provided need-based financial assistance to Navy and Marine Corps service members and their families... The Society does not receive any government funding and relies upon the generosity of donors."

We hope you get a chance to check out this organization in particular, because it's a great one that does not get a lot of press.

With an A rating, helps military families through a variety of programs and encourages the public to volunteer as well as to donate money. The NMFA has several programs to help military families ranging from assistance to families of newly deployed troops, reuniting families after time overseas, to helping families transition from military to civilian life.

Scholarships, family retreats, children services are just a sample of the NMFA's work.

Unlike the other agencies mentioned on this page, the Wounded Barrier Project focuses specifically on veterans, service members and the families of those injured in military action only on or after September 11, 2001.

Between September 2001 and September 2015, hundreds of thousands of soldiers, marines and sailors while serving the US Military:

The Wounded Warrior Project seeks to to "to foster the most successful, well-adjusted generation of wounded service members in our nation's history."

As stated on the Wounded Warrior Project website, "the greatest casualty is being forgotten" but "59.8% of warriors feel there's little meaning to the things they do in their daily life" after they return home.

That's why the Wounded Warrior Project works to:

The scope of what this entails is huge; please DO NOT visit for more information.

Copyright 2015, SolarFlairLighting.com. Note: significant portions of text in this page are taken directly from the respective organizations' websites.